When I decided to throw a friendsgiving party I didn’t even realize it was such a popular thing until November came around and every other Instagram post was a friendsgiving dinner party.

As a nurse with low seniority you sort of don’t get a choice but to work all the holidays that no one else wants and that’s how we got here.

I‘ve had a couple dinner parties where I cooked but it was always just something small so cooking an entire Thanksgiving FEAST for 25 people takes it to a different level! I did not plan on having 25 people when I decided to cook everything but I didn’t want to leave anyone out so yeahhh it was a little more than anticipated BUT everything turned out great… surprisingly. 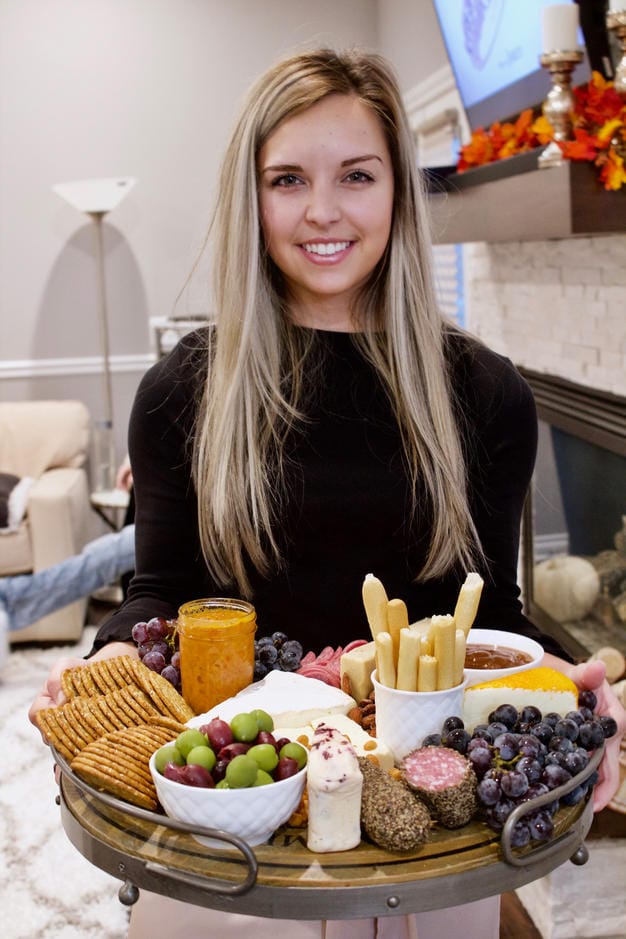 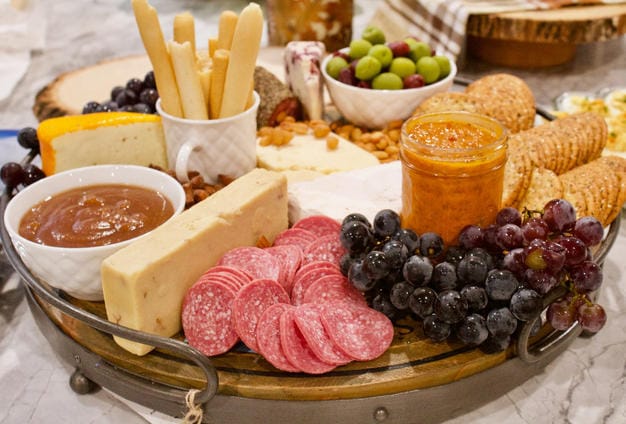 I LOVE the look of cheese boards/charcuterie even though I don’t really eat cheese lol so I had to do a little research because I’m not really sure what any of these taste like. I would think that people prefer soft/spreadable cheese with crackers and salami so I got double cream Brie, Port Salut, and Wensleydale with Cranberries.

I really wanted Concord Grapes because they’re my favorite and I think they look nicer so I went to like six different stores before I found them at Whole Foods.

I got the multigrain crackers and Italian breadsticks from Trader Joes as well.

The salami and peppered salami you can get anywhere.

I didn’t want to put too much meat because I had three different meats for dinner but of course the meat was the first to go.

I had a mix of Kalamata Olives and Castelvetrano Olives… which no one ate.

For salty I went with salted almonds from Kroger and for sweet I had honey roasted peanuts.

In the white bowl is homemade apple butter (sooo easy to make and turned out amazing) and in the mason jar is zacusca, a romanian spread made from eggplant and red peppers (all recipes will be linked down below). 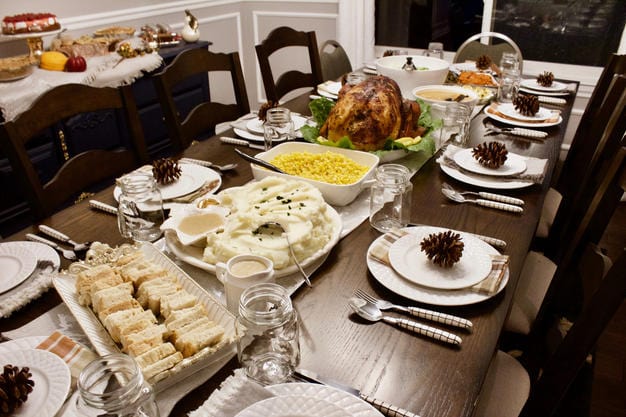 Dinner was pretty traditional. I made almost everything from scratch and it was my first time cooking a turkey and let me just say, it was phenomenal! We had mashed potatoes with turkey and stuffing. I made gravy out of the turkey drippings and we had corn, baked carrots and green beans on the side.

The deviled eggs and bread were supposed to be appetizers but they were set on the table so we ate them with dinner. 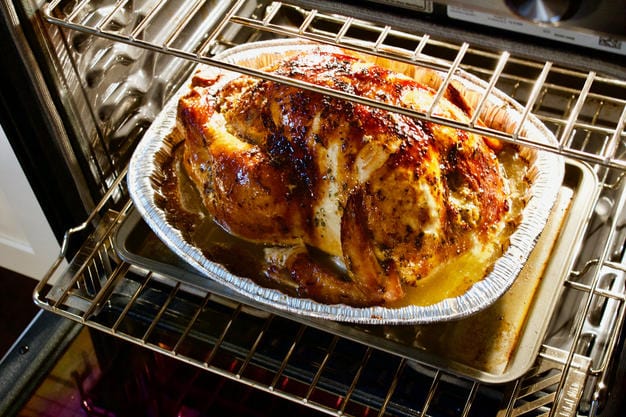 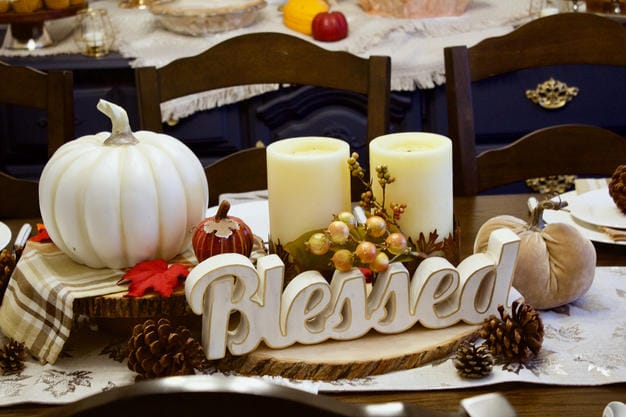 This was my centerpiece before all the food was set on the table, see how my house was decorated for fall/friendsgiving here.

On to the best part, dessert.

So like I said, I made everything and I’ll link all the recipes down below.

My favorite are these pumpkin cupcakes! I’m not a huge cupcake fan but these…oh goodness *heart eye emoji*.

It was also my first time making pie and I had enough pie crust to make pumpkin pie and apple pie which both turned out great.

The cheesecake is the same cheesecake I make for literally every event because my tribe doesn’t like to try new things so I can’t have a party without cheesecake. I also had chocolate chip cookies and the apple butter in the mason jars were favors.

I got this dresser free off craigslist and painted it. 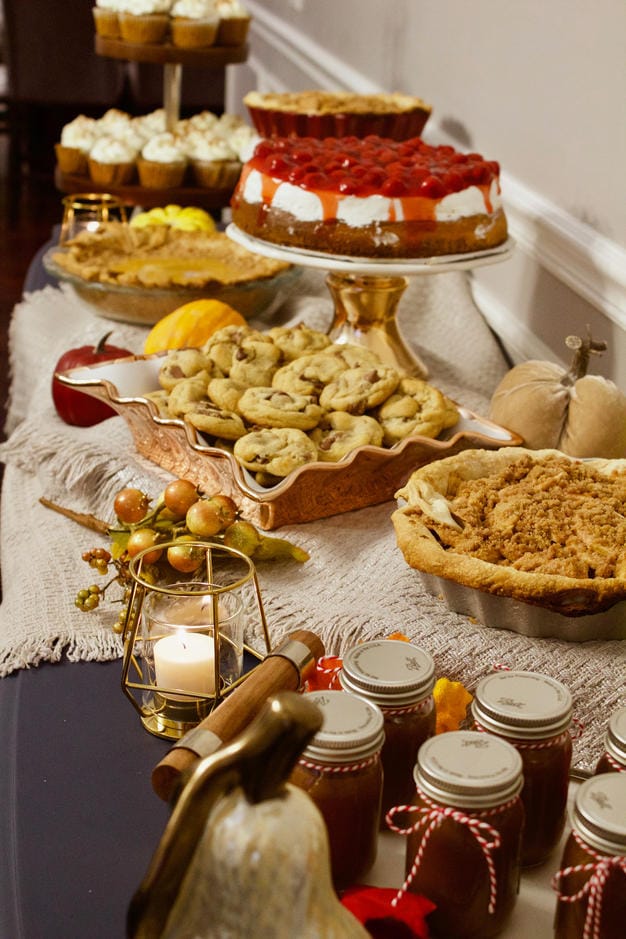 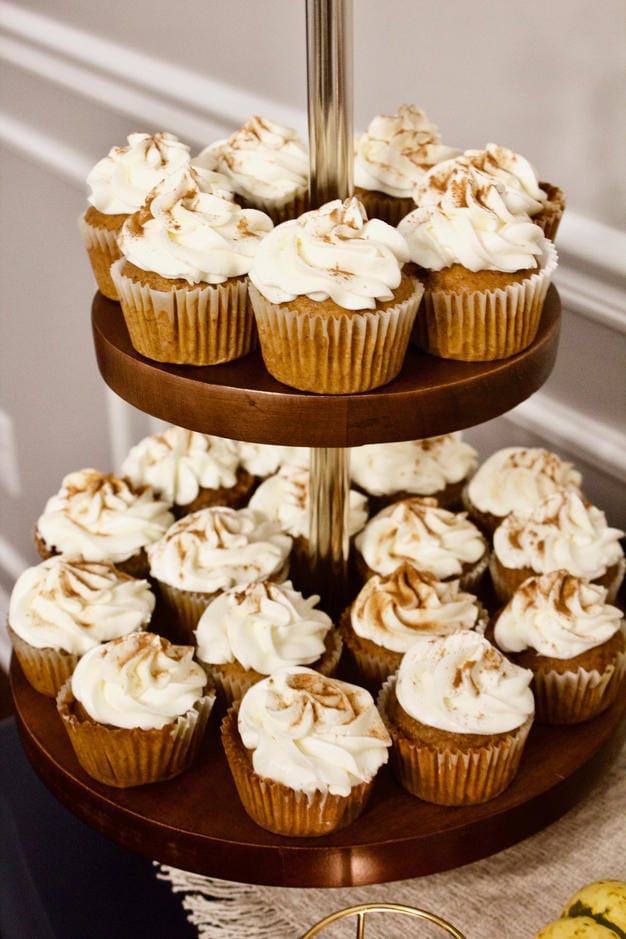 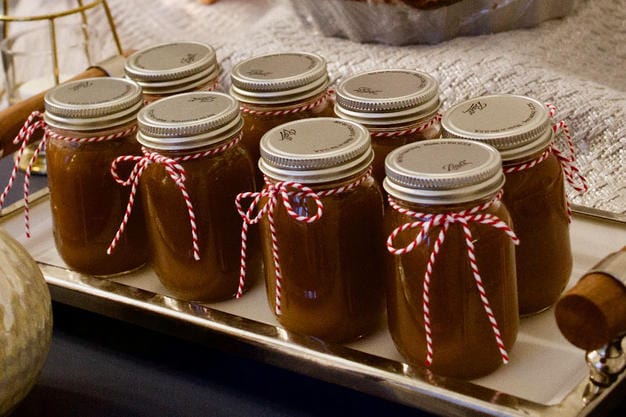 These aren’t the best quality pictures but here are my two girlfriends who came to save the day and here’s me being sassy, as usual. 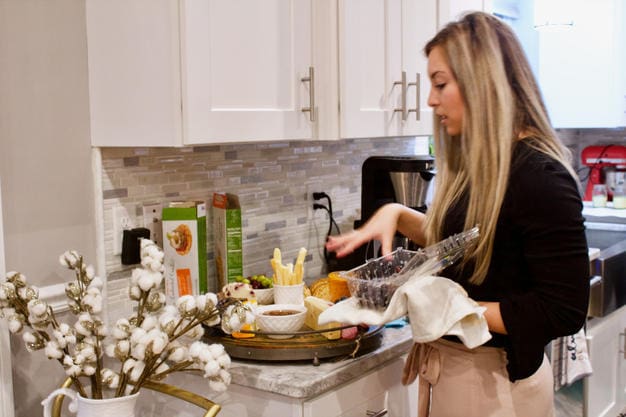 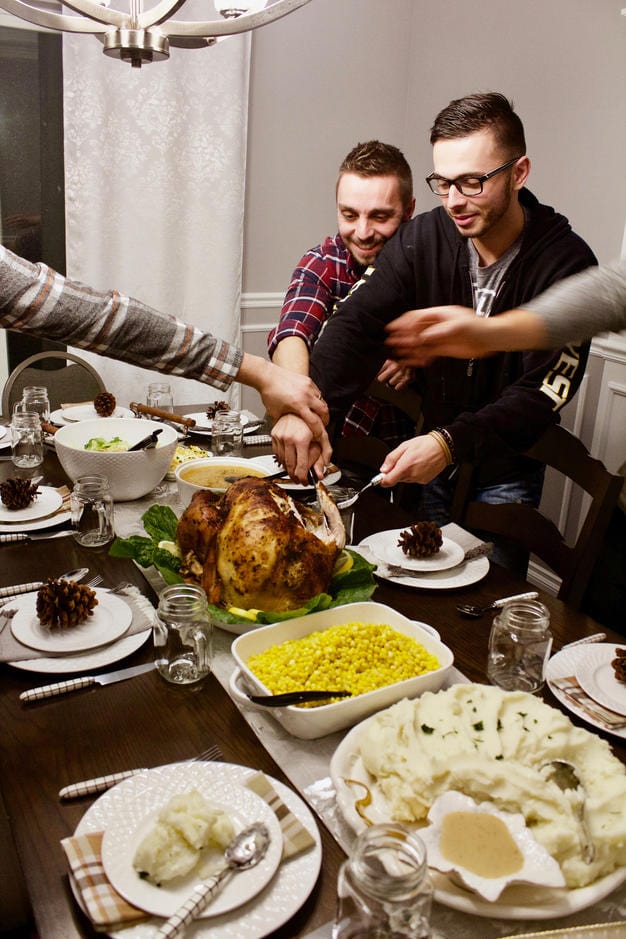 The boys wanted to romantically cut the turkey together. 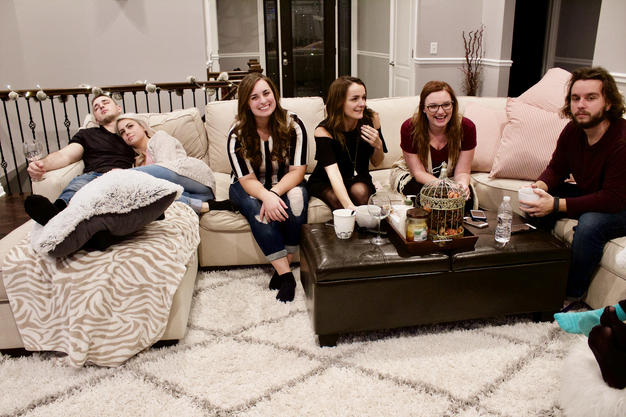 My half empty bar cart 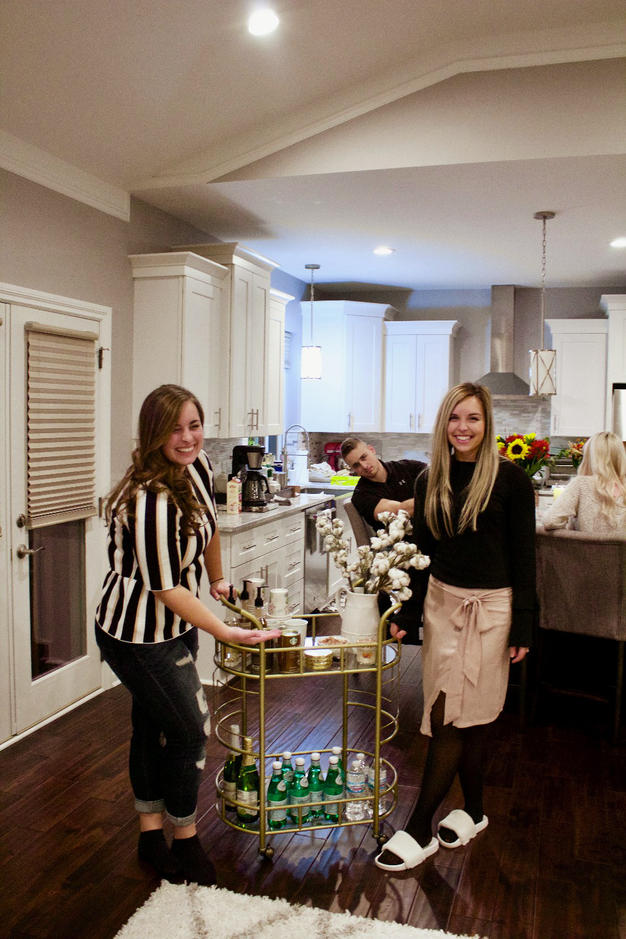 Oh can’t forget! My sister-in-law brought me these GORGEOUS pearls so of course I had to put them on. I have no idea where they’re from but I love them <3. I also have this odd habit of leaving tags on everything I buy but I tried to take them all off so I wouldn’t look like a weirdo but I still forgot some! See if you find them in my pictures 🙂 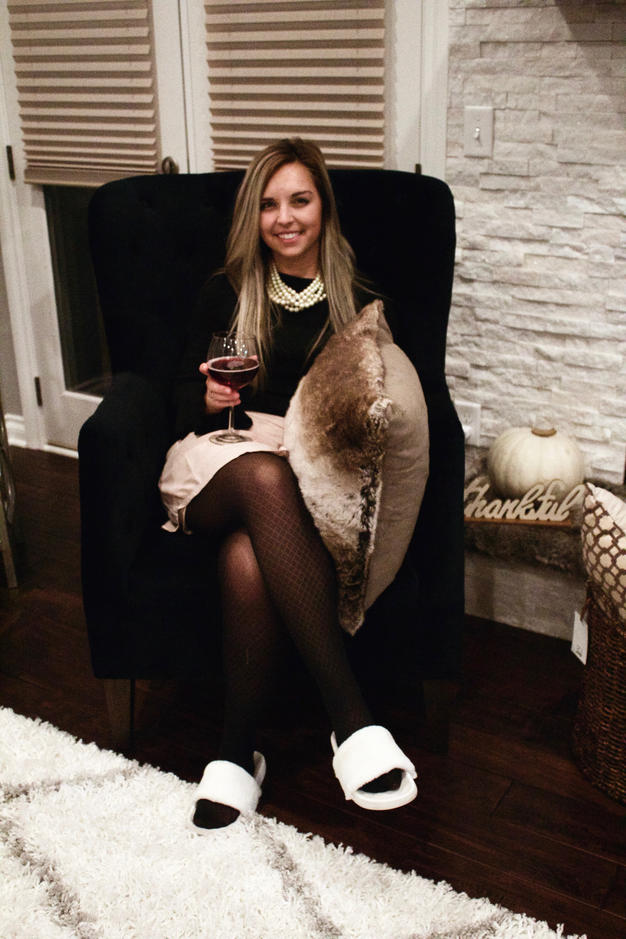 Charcuterie Board – everything is listed above.

Apple Butter – I used vanilla extract because I forgot to buy vanilla beans. I also added a little corn starch to it because it was pretty thin. I let it cook forever and even after it cooled it wasn’t too thick. I took a little out and sifted probably a tbsp of cornstarch mixed it really well and mixed it all in together.

Zacusca – eggplant and red pepper spread. My moms recipe, I’ll link it when I get it up!

Turkey & Stuffing – All my turkey and stuffing was gone so I think it’s safe to say it was delishh. I sort of just googled a bunch of different recipes & put them all together.

Mashed Potatoes – I don’t use a recipe for this. It’s really just russet potatoes, milk, butter and salt to your liking!

Gravy – I added a more flour because it seemed too thin but I would suggest letting it cool a little because it’ll thicken on its own.

Carrots – baked about 30-40 minutes because we like them soft

Corn –  warm it up on the stove with a little butter!

Cherry Cheesecake – the cheesecake I make for EVERY event. I don’t know what it is about this cheesecake but my family is slightly obsessed, I don’t have a post about it yet but I’ll link it as soon as I do!

Apple Pie – came out sooo good, I used granny smith apples and this streusel (put the left overs on the pumpkin one).Carrot Cake

Chocolate Chip Cookies – I have made probably a MILLION different homemade cookies in the past few years and none of them were this good. I followed the recipe EXACTLY because as simple as chocolate chip cookies sound, they are very particular.

Pumpkin Cupcakes – I used the recipe from these muffins but without the cream cheese or the streusel part. I made a cream cheese frosting for it instead and they were probably my favorite thing I made. I’ll do a whole post on these soon. I love hosting, I would do it for a living if I could! Let me know if you try any of these and whether or not it turns out for you. I’d love to see what you guys did for your friendsgiving or thanksgiving parties! As always  if you have any questions/suggestions comment down below!